On July 16, 2013 the property owners of 754 -758 Bonair Street, requested the La Jolla Development Permit Review Committee (DPR), a subcommittee of the La Jolla Community Planning Association (LJCPA) to approve their Coastal Development Permit, Tentative Map and Variance. The applicant wanted to demolish an existing duplex and construct three, 3-story, detached single family residences ranging from 1,929 square feet to 2,185 square feet on their 9,225 square foot lot. The variance requested was to maintain two curb cuts, where only one was allowed by code. 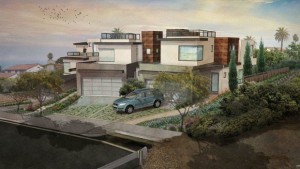 Rendering of the Bonair project that was denied by DPR and approved by the LJCPA.

At the first DPR meeting the applicant was instructed to return to the subcommittee with the following additional information for their final review; (a) Provide a photographic study of the Neighborhood Character, include both sides of the block and the adjacent block. (b) For the aboveproperties provide lot areas and floor areas. (c) Draw relationship of units to the bike path. (d) Address drainage issue. (e) How will the units be finished, colors, provide material board. At the second DPR meeting it was determined the findings could not be made and DPR denied the project by a 5-0-1 vote.  The subcommittee concluded that the project did not conform to the La Jolla Community Plan nor was it consistent with the established Neighborhood Character in terms of “bulk and scale”. The DPR subcommittee also concluded that the curb cuts were too close together and therefore a variance could not be supported.

Joe LaCava candidate for the termed out District 1 council seat of Sherri Lightner’s.

Instead of returning to DPR with a revised or modified project, the applicant hired a paid registered lobbyist with the City of San Diego and the LJCPA’s Vice President, Joe LaCava, to represent their project at the LJCPA’s next monthly meeting.  LaCava stated to his fellow LJCPA Trustees, he would present the project differently. He went on to proclaimed his client’s project complied with all of the elements of the San Diego Municipal Code, except for the variance for two non-conforming curb cuts. Despite concerns from several LJCPA Trustees who questioned the sudden representation by LaCava and thought the project should return to DPR the project was approved by a 11-4-1-1 vote. 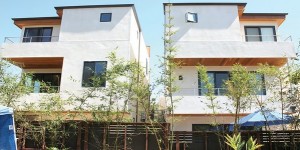 Linda Dan Zant, a concerned neighbor of the project stated the project was “fraught with what appears to be many procedural irregularities, from the time it left the DPR to what was ultimately constructed”. She requested the LJCPA to conduct a full investigation into the LJCPA’s approval process and if necessary amend their bylaws to prohibit Trustees from being paid lobbyist for projects brought before the group. As well, Dan Zant requested an investigation into the discrepancies between the LJCPA approved project at 754 -758 Bonair Street and the ultimate project built. Based on facts and figures presented by Dan Zant, the project actually constructed is larger than the project LaCava presented to the LJCPA.

Dan Zant passionately pleaded that the LJCPA’s approval process must become more open and transparent. “You cannot be a lobbyist at the same time you are a Trustee.” “The taste in the mouth of us citizens is so bitter.” She went on to say “….being both a lobbyist and a LJCPA Trustee gives the community the impression of really bad caretaking……“You guys are the firewall for stopping what is happening in our community, and it didn’t happen in this case.”

Let’s wait to see if the LJCPA Trustees do in fact, investigate Dan Zant’s concerns.