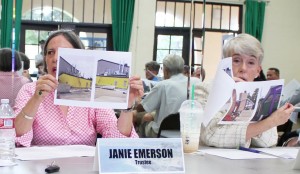 According to comments at the July 28, 2015 La Jolla Shores Permit Review Committee (LJSPR), the three La Jolla Shores Association appointees to the committee, expressed concern that the “community” is unhappy with the color scheme of Galaxy Taco.

They cited the yellow accent color used to paint the exterior walls of the rear kitchen building is in violation of the La Jolla Shores PDO. Dolores Donavan, Janie Emerson and Myrna Naegle requested Tony Crisafi, the LJSPR Chair, write a letter to the La Jolla Community Planning Association (LJCPA) requesting the Galaxy Taco color issue be put on the August 6th agenda of the LJCPA. Ms. Emerson stated she additionally contacted the landlord and expressed our “community’s” concern.

At the August 6th meeting of the LJCPA, the three, presented the “community’s” concern. The LJCPA determined, if the yellow accent color was in violation to the La Jolla Shores PDO, the issue was than a code violation. Code violations are handled by the San Diego code enforcement department, not the LJCPA. The owner of Galaxy Taco that evening, admirably offered to repaint a portion of the building, using a green accent color. Hopefully, this will appease the trivial request of our three “community sheriffs”. Kudos to Galaxy Taco!