Give Ellen Browning Scripps back her legacy! 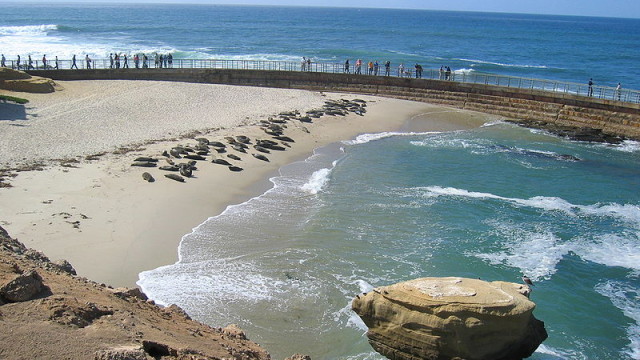 Want to know why so many voters are angry this year? Look no further than San Diego’s own “leaders.”

The issue: Closing of the La Jolla Children’s Pool to people — yes, people! To children, divers, swimmers and handicapped vets.

Why? So that some seals can haul out and pup and poop there.

Not only that — people and children are forbidden in the area so that the seals can bask in the sun while producing so much fecal material that signs are now posted to the east at the venerable La Jolla Cove warning everyone to: “Swim At Your Own Risk.”

Not only is the water contaminated, so, too is the sand both at the Children’s Pool and the nearby Cove.

Let’s be clear: The resident seals at the Children’s Pool are newcomers. They are neither an endangered nor a protected species.

“(C)ourt testimony indicates that the seal colony originated from dozens that were rescued, rehabilitated and returned to the wild by SeaWorld in the mid-1990s following creation of an underwater reserve east of Children’s Pool.”

Previously, SeaWorld had released such seals off Point Loma.

The interloping seals at the Children’s Pool are of the least desirable kind.

Construction of a new lifeguard tower has been stopped. And hundreds of the seals have established another beachhead at the Cove.

Once a novelty and now a nuisance, the seals have cowered our leaders broke a trust that is older than most of the City’s residents.

By way of full disclosure, I am a San Diego native who has competed in the La Jolla Rough Water swims from 10 and under to senior. I have worked out in the Cove and in every local ocean beach and bay for decades.

Seals, leopard sharks, jelly fish and sting rays are no strangers to me. They need no protection. And they certainly don’t need an entire urban beach to themselves.

What is strange to me is that anyone representing the City would try to break a “Trust”—indeed, a gift from one of the greatest benefactors the City has ever embraced.

I am speaking of Ellen Browning Scripps. Yes, she who founded the Scripps Institution of Oceanography, Scripps College, Scripps Hospital, and Scripps Clinic. She has also contributed to many, many organizations including the San Diego Zoo.

And she who envisioned, paid for, and oversaw the carefully crafted engineering and architectural marvel—designed to last — “Until Kingdom Come.”

To begin the 10-year long construction, all the “permits and authority” were secured from:

Scripps never dreamt, I am sure that our future “leaders” would violate that Trust.

Then again, perhaps she did fear it—by adding several codicils to her Last Will and Testament. “Plans have been prepared for developing the Pool near my home….if the work is not accomplished during my lifetime, I request…to go forward with it.”

On May 31, 1931, neighbors gathered at the breakwater to celebrate the Children’s Pool. Scripps was too ill to attend. She died the following year.

Perhaps, this May 31, we can all celebrate the Orange County Superior court ruling that has honored the Ellen Brown Scripps Trust by invalidating the City’s attempt to breach it.

This will last longer that the Mt. Soledad Cross fight.

The seals don’t need protection. The Children do. Give them back their pool “Until Kingdom Come.”

And give Ellen Browning Scripps back her legacy.

One Response to Give Ellen Browning Scripps back her legacy!