Leadership issues with the LJCPA 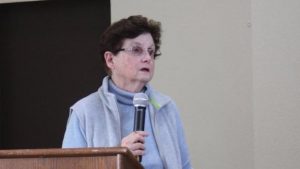 A frustrated Helen Boyden acting as Chair of the LJCPA after Chair, Cindy Gretrex is disqualified due to her attendance record. Photo by Ashley Mackin-Solomon.

I recently read an article in the La Jolla Light regarding leadership issues with our community group. I would like to offer my opinion as to why there is a shortage of leadership in the La Jolla Community Planning Association (LJCPA). Contrary to Joe LaCava’s comment in the article many qualified people in our community, although angry, have chosen not to get involved with this group due to the absence of credibility and transparency in the community planning process. Given the option, most people would prefer to watch a train wreck than be in one.

What’s happening with our community group is excellent material for a new cable TV reality show. “Thursday Night Live in La Jolla” might be a suitable name. The director would have a difficult time selecting which stars and material to use for the season’s premier episode.

Conceivably, he or she could start with the LJCPA election in which two LJCPA Trustees ran for re-election, despite being termed-out and disqualified, but went on to claim victory. Only after an election challenge was filed, did one of the termed-out Trustees admit to his error and step down. The other while repeatedly admitting he was not duly elected, refused to step down.

Or perhaps the premier episode could be about the infamous LJCPA Trustee who has gone to the dark side, now seemingly making money opposing applicant’s projects rather than approving them. Nevertheless, in one of his senior moments, he mistakenly divulges his true intentions at a Planning Commission meeting exposing how deceitful and dishonest the planning approval process is in La Jolla.

Maybe the episode would be about the time a former LJCPA President, despite an 8-4 LJCPA vote to appeal a home he designed, refused to file the LJCPA’s appeal in the 10-day period allotted. His deliberate omission of not filing this appeal saved his client thousands of dollars and months or environmental review.

Possibly the premier should introduce one of the many stealth “save our community groups” strategically used by some of the LJCPA Trustees to add cost and delay to an applicant’s project. The star of this episode would have to be their exclusive go-to attorney who is always ready and willing to file an appeal or a frivolous lawsuit when this group of LJCPA Trustees don’t get their way.

No, all the above-mentioned episodes will have to wait. The premier episode must be two hours long. The first hour will feature a LJCPA Trustee and the go-to attorney and their bogus community group “Save La Jolla” opposing the beach front expansion of his neighbor’s deck. But due to his neighbor’s persistence, the parties end up in Federal Court, twice! The first hour will end with the court slapping the Trustee’s hand and warning him not to trespass on his neighbor’s property again. The second hour will end with a video from the neighbor’s security camera showing our LJCPA Trustee trespassing not once but seven different times between 11:59 pm and 1:38 am in the morning. The combination of the neighbor’s video and the associated police report, describing an inebriated 68-year-old LJCPA Trustee in his night shirt and slippers trying to explain to the police why he was playing “ding-dong-ditch” at his neighbor’s front door were so compelling the jury awarded the neighbor $121,000.00 in damages!

Any one in our community angry enough to be the next star of “Thursday Night Live in La Jolla”?