La Jolla Community Planning Association to Hillel: “No! No! No!” 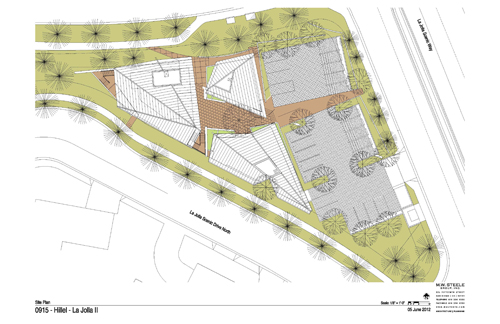 SAN DIEGO–A La Jolla planning group had three answers to Hillel of San Diego’s request to build a religious, intellectual and spiritual center on land it owns near the UCSD campus:   “No,” “no” and “no.”

There were three interrelated questions before the La Jolla Community Planning Association on Thursday evening, June 7, during the advisory group’s meeting at the La Jolla Recreation Center,  615 Prospect Street.

One question was whether Hillel could have a temporary use permit to continue occupying the residential property now designated as the Potiker House at 8976 Cliffridge Avenue, adjacent to the campus.   The city government has allowed Hillel to continue operating there for the last seven years pending resolution of the land-use issues at its proposed new site, which  is located on an irregular patch of land bounded by  North Torrey Pines Road, La Jolla Village Drive and La Jolla Scenic Drive.

The La Jolla Community Planning Association voted 10-2-1 against a temporary use permit, against vacating a street, and against the new center.

The  proposed new center would sit on land that  is 0.76 acres and shown on old city planning documents as having a street bisecting it.  After the City of San Diego sold the land to Hillel, some thought having the street eliminated from the official documents was a mere technicality.  However, the La Jolla Community Planning Association disagreed, voting to deny what’s called a “street vacation.”

The main issue–construction of a 6,500 square-foot, three-building center–was also voted down by the planning group, notwithstanding the fact that the project had been scaled down from an original 12,000 square foot proposal and numerous other changes requested by the community had been incorporated.

Michael Rabkin, the new executive director of Hillel, thus witnessed the kind of homeowner opposition that his predecessor Rabbi Lisa Goldstein had faced through much of her 15-year tenure with the organization benefitting Jewish students. Goldstein has since moved to New York City to serve as executive director of the Institute for Jewish Spirituality.  Rabkin previously had served as Hillel director at Emory University in Atlanta, Georgia.

In an interview, Rabkin addressed the issues point by point.

On the issue of the temporary permit for the current Hillel operation at 8976 Cliffridge Avenue, Rabkin said the opponents contended “it is not an allowable use in a residential area.”  However, he said, what is allowable in a single-family residential area is a church or a religious building.

A group calling itself Taxpayers for Responsible Land Use, represented by attorney Julie Hamilton, contended that various legal findings have to be made in order to permit a street to be vacated.  Rabkin said her presentation amounted to “an effort to use technicalities to shut the project down.”

Most of the testimony and debate was on the main issue — the project itself.

Rabkin said that as proposed the project will include “three small structures that resemble single family residences, one of which is two stories and the other two are single stories, and they essentially have meeting rooms, a board room, a library and a chapel.”

The project is “surrounded by a beautiful open courtyard.  The city asked us to incorporate about 10,000 square feet of native material, so (under the proposal) most of the land will be landscaped with California native species, Torrey pines, pedestrian and bike paths, a bench, a drinking fountain — it will be a small park basically that the entire community will be able to enjoy, open to the public and maintained and paid for by Hillel.”

He added that 27 on-site parking spaces will be included on the site– a figure which he said is greater than projected needs for parking.  “Basically you are looking at a conservative parking demand ratio, less than 1 vehicle for 5 visitors, and a 1`:1 parking ratio for the professional staff,” Rabkin said.  “On a pure square footage basis, you are looking at a parking ratio of 3.75 parking spots per 1,000 square feet (of building).  Other Hillel Centers provide less than 2 spaces per 1,000 square feet, so we are way higher.”

The executive director pointed out that the Hillel Center will be located across the street from the campus, where students either live or have permitted parking spots.  Most students, he said, would walk or bike to the Hillel Center rather than drive.  There is also accessible public transportation, he said.

These arguments were convincing to the Traffic and Transportation Subcommittee of the La Jolla Community Planning Association, which voted to recommend the proposal favorably.

However, at the CPA meeting, arguments presented by opponents dealt with less tangible issues, according to Rabkin.

For example, he said, there were arguments that by building the facility, a street would be narrowed by two feet and while it still would be within city parameters public safety would be jeopardized.

“That argument doesn’t hold water,” said Rabkin.  “In fact, urban planners know well that narrower streets actually increase safety because they make people slow down.  So that was an argument based on their misunderstanding.”

He added that there was discussion by some planning board member about the impact of “allowing Hillel to build a religious facility in a residential area.”  It was suggested that there are other groups at UCSD which might want to do the same thing and “that they would end up with 57 different facilities,” Rabkin said.  “But it is interesting that Hillel isn’t the precedent.  There is an LDS (Mormon) facility at La Jolla Farms, a Lutheran Church, a YMCA, and a Catholic Church.  The whole reason that the La Jolla Shores  allows for religious structures is they know that they help to build community.”

Rabkin said opponent also speculated that a Hillel Center “is akin to a fraternity or a sorority and they made the ‘slippery slope’ argument that as soon as you allow this kind of place, it’s like bringing fraternity row to the neighborhood and before you know it, there will be drinking clubs.”

The Hillel director, in La Jolla for five months, was asked if he believes anti-Semitism is a factor in the opposition to Hillel.

“It is possible there is anti-Semitism but I don’t know because I haven’t personally been here long enough to experience it, just five months, but I know the history of La Jolla; it is not a pretty history,” he said.  “I also know that there are a lot of younger families here, and I am not convinced that they have the same sensibility.”

He added: “I know we have spoken with a number of families, neighbors who live across the street. I understand their fears and they probably are more motivated by the fear of change than anything else.”

The La Jolla Community Planning Association is just one of a number of advisory groups that will offer their opinion on the issue, but ultimately the issue will go before the San Diego City Council, probably sometime after the November election.

Sherri Lightner, the current city councilmember representing the La Jolla area, was one of the strongest opponents of Hillel before her election to the City Council four years ago.  Now, seeking her second term, she recently placed second in a primary election behind Ray Ellis. The two will face off in the November general election.

After the election, the City Council will have nine rather than eight members as a result of reapportionment stemming from San Diego’s switchover to a strong-mayor form of government.  A majority of five votes will be needed to decide the Hillel, issue.

*
Harrison is editor of San Diego Jewish World.  He may be contacted at donald.harrison@sdjewishworld.com