Residents in the Westknoll neighborhood blocked crews from installing a wireless antenna Monday morning. “This whole thing stinks, there’s something wrong here,” said David Haney. Crews from Crown Castle, for which La Jolla Community Planning Association’s President Joe LaCava is a paid Lobbyist,  were installing cellular equipment on a city light pole in front of  Haney’s property. He and angry neighbors  banded together to protest the installation, even parking a car to block the work site. “We feel as though we’ve been dealt the short end of the stick,” said Lou Cumming, resident. “Basically, I was lied to from the get go,” said Haney. 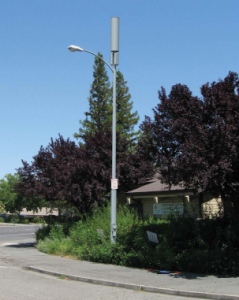 David said he had been fighting the tower since 2014, that’s when he first contacted city councilman Sherri Lightner. “My answer from Sheri Lightner was they’re not doing that, and if they do they have to go before the city council,” said Haney. Haney and his neighbors thought they had an agreement with the city and Crown Castle. “They agreed to meet with us, come out here and talk about alternate sites,” said Haney.Such was not the case, when residents got notice Friday afternoon work would begin Monday morning. “They did a typical politician document dump, we were notified Friday afternoon at 4:45 that the work crew was going to showing up at 8:00 Monday,” said Cumming. “Sherri Lightner won’t talk to us, her office won’t talk to us,” said Haney.

Fox 5 contacted Councilwoman Lightner and we were told the tower is needed to improve network coverage and “For comparison, the antenna and exposure is similar to the level of radio frequency emissions from a baby monitor.” Lightner also said the Westknoll location is the only viable site and in essence, because of FCC regulations the city’s hands are tied. “We do not have the authority to relocate or stop the installation of antennas.” Crown Castle sent Fox 5 the following statement.

“Crown Castle works collaboratively with La Jolla and nearby residents to ensure our small cell installations take into account community sensitivities and aesthetics and are in strict compliance with all local regulations.  The location selected represents the best option for providing the community with sufficient coverage and capacity for their wireless needs.”

Haney and his neighbors know it’s a battle they can’t win, but said they will be losing out in more ways than one. “Every body knows there are health effects, because of that people who buy homes don’t want to buy a home near a cell tower,” said Haney. “We just feel as though we’ve been had, our city government has betrayed us and they have led us down a primrose path at the point where we are today, where we are unable to have any recourse now,” said Cumming “It will have a negative effect on property values by having cell phone towers to close proximity to residences.”