Impeded by natural and manmade delays, the construction of two multimillion dollar lifeguard towers in La Jolla is far behind schedule and may not be completed until summer is over. Lifeguards at La Jolla Cove and the Children’s Pool are operating out of temporary facilities as the unfinished towers 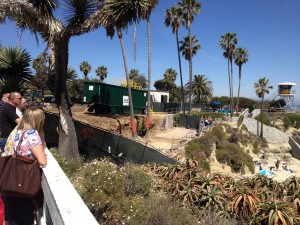 look like construction zones to those visiting for the scenic views.

The station at the Children’s Pool was slated to be done last December, and the city knew construction would be tricky. They were not allowed to work on the tower from Dec. 15 to June 1 because the sea lions there were in their pupping season. A seagull egg then caused another six-week delay. “We didn’t realize we had to wait until the seagull was actually born and had flown from its nest one time in order for us to start construction, so that was all lessons learned,” said Myra Dayon, a deputy director for the city’s Public Works Department.

Construction at La Jolla Cove has not gone much farther. The project started in February 2014 and should also have been finished in December 2014.
However, crews halted work to make way for a fireworks display and a triathlon. They also had to wait for the schedule of contractor APR Construction to match up. “Some of the delays have been the contractor wanted to use the existing ocean bluffs to build the concrete cantilever,” Dayon said. “But once we learned he couldn’t do it, we had to hire a structural engineer to do a shoring. So those little things like that build up.” She said the city hopes APR Construction will finish the La Jolla Cove tower by the end of next month. The Children’s Pool location should be completed by the end of the year.

The two stations, as well as a third that also caused some headaches, have cost the city nearly $9 million. The third tower, in La Jolla Shores, is up and running, only after the city had to spend $150,000 on a glaze expert and other consultants to fix a glare problem with its glass windows. “We ended up with five panels; instead, it was originally three. And we tilted them outwards and opened up the angles,” said Mark Nassar, a public works deputy director. After the glare snafu, the city is making mockups of every tower before construction to avoid another delay, the officials said.

The city has also set up the temporary lifeguard stations to make sure safety is not a factor. A local television station reached out to APR Construction, whose representative said they were not allowed to comment on construction.