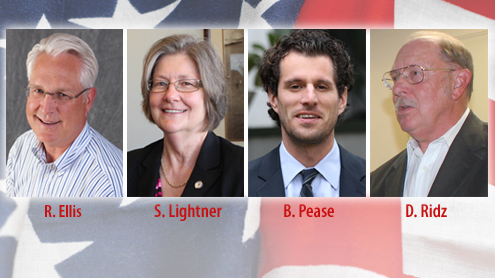 It is not uncommon for incumbents to run unopposed or against an opponent without major party backing, in San Diego.  Sherri Lightner has environmental lawyer Bryan Peace (Democrate) and Torrey Pines Community Planning Board Chairman Dennis Ridz (Republican) to thank that she is still in the race to represent District 1.  John Dadian, a local political consultant with no ties to the race was correct when he stated in the UT San Diego, ” Having credible candidates without major party backing such as Pease and Ridz could force a runoff “. The votes recieved by these two candidates, 1,742 and 1,400 votes respectively, siphoned off enough votes from Ray Ellis and Sherri Lighter to prevented Lightner from becoming the first incumbent council member in 20 years to lose a San Diego City Council race . Ellis, with 11,085 (45.45%) was the top vote getter for the right to represent La Jolla, University City and Carmel Valley areas of San Diego. Lightner with 10,162 (41.67%) followed in second place.  Neither received 50% of the votes needed to claim the seat outright. Ellis and Lightner will now proceed to the November election for a runoff.