On March 5th the La Jolla Community Planning Association will be holding their annual election. It appears, once again, Mr. Whittemore wants to be elected to the La Jolla Community Planning Association (LJCPA). Why? This is a position he resigned from in October 2014, after publicly stating he would rather resign then serve on the LJCPA with elected Trustee Michael Morton. 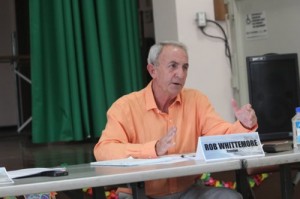 With all due respect, I personally will not be voting for Mr. Whittemore for numerous reasons. In my humble opinion over the past several years he has exhibited questionable behavior as a LJCPA Trustee and as a resident of La Jolla. I therefore believe he is not an advisable candidate to represent our community or the LJCPA. Although I could offer several examples of his questionable behavior the enduring dispute between he and his next door neighbor, Dr. Cardenas,  I believe is an excellent example why Mr. Whittemore should not be elected to serve as a representative of our community.

Dr. Cardenas and his family initially encountered  Mr. Whittemore when LJCPA Trustee Whittemore objected to the replacement and expansion of the decaying beach front deck at their home. Mr. Whittemore used his political influence and the help of the then LJCPA President, Tony Crisafi, to delay and frustrate the Cardenas family desire to simply improve their home. Exasperated Dr. Cardenas ultimately filed a lawsuit (United States District Court Case No. 10CV1808-LAB-KSC) to obtain clarification of their respective rights, clarify antiquated CC&Rs and to reprimand Mr. Whittemore for trespassing on their property to erect story poles.

On February 12th and 13th  2013 a court trial was held, Judge Larry Alan Burns presided. Court records show that during the trial there was substantial evidence that Mr. Whittemore had negatively impacted not only the Cardenas Family but other neighbors with his conduct. Mr. Richard Sulpizio, an executive at Qualcomm testified that Mr. Whittemore consistently used improper means to interfere with construction in the neighborhood.  Mr. Warner Lusardi, the former owner of Dr. Cardenas residence and the former patriarch of the iconic San Diego contractor Lusardi Construction, testified that he became so frustrated with the interference from Mr. Whittemore that he felt compelled to sell his property.

On the afternoon of February 13, 2013, the Court announced an oral verdict granting judgment in favor of Mr. and Mrs. Cardenas and against Mr. Whittemore, including an award of nominal damages for Mr. Whittemore’s trespassing on their property. In his oral ruling, the Court stated ; “ … the sense I get from Mr. Whittemore  listening to him testify and listening to Ms. Bond testify is that he wouldn’t do anything liking this again. He’ll stick to the Court system if he’s in need to resolve future disputes. He won’t resort to self-help.”

The Court was wrong. During the night of Feruary 13th and the early morning of the 14th, 2013, a mere 10 hours after Judge Burns’ warning in open court, Whittemore once again repeatedly trespassed on to the Cardenas’ property to harass his family. On seven different occasions between 11:59 pm and 1:38 am Mr. Whittemore trespassed onto the Cardenas property and rang their doorbell without waiting for anyone to answer the door. He did so while Mr. and Mrs. Cardenas and other family members which included the three Cardenas children, aged 10, 13, 15 and Mrs. Cardenas mother were sleeping. Unbeknownst to Mr. Whittemore, his actions were being recorded on the Cardenas security cameras (Click here to see video). The San Diego Police were called and Mr. Whittemore was apprehended. The Police officer testified Mr. Whittemore was verbally abusive and appeared to be inebriated.

Mr. Whittemore’s inappropriate actions that evening instigated Mr. and Mrs. Cardenas to file a Restraining Order against Mr. Whittemore for their own protection, San Diego case No. 37-2022-00034647. During the three day TRO trial, April 16th through April 19th, 2013, Mr. Whittemore stated that he did not consider his own conduct inappropriate. He testified that he thought his harassment was justified despite admitting to drinking and a loud exchange with the police that evening. He even went as far as to state to the court that he would repeat his conduct should he face the same circumstances in the future.

The court awarded Mr. and Mrs. Cardenas and their family protection and issued a Temporary Restraining Order against Mr. Whittemore (Click here to see TRO). The TRO ordered Mr. Whittemore to not “harass, intimidate, molest, attack, strike, stalk, threaten, assault, hit, abuse, destroy personal property of, or disturb the peace of the Cardenas family. Additionally Mr. Whittemore was ordered, over his objection to surrender his firearms to the police. Lastly he was ordered to register with the California Restraining and Protective Order System.

I am advised the menacing action has not stopped and the Cardenas family has elected to abandon their beautiful home and are now trying to rent it out, while another lawsuit currently pending against Mr. Whittemore is resolved (Joseph and Machelle Cardenas v. Robert Whittemore 13 CV 1720 LAB-KSC). The results of this case should be very interesting, as the same Judge Larry Alan Burns who previously stated; “ … the sense I get from Mr. Whittemore  listening to him testify and listening to Ms. Bond testify is that he wouldn’t do anything liking this again. He’ll stick to the Court system if he’s in need to resolve future disputes. He won’t resort to self-help” will be presiding over this case also. (Click here to read a related story about Mr. Whittemore and Mr. Crisafi shenanigans.)