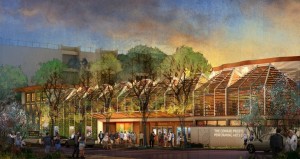 On Thursday, the La Jolla Music Society made a presentation to the La Jolla Community Planning Association that included showing renderings of the proposed Conrad Prebys Performing Arts Center for the first time. And it announced its intention to start the formal submission of plans to the city for approval within the next two weeks.

“We’re at the end of what we call schematic design,” said Alan Joslin, principal-in-charge at Epstein Joslin Architects, which is designing the center. “The La Jolla Music Society has embraced the layout of the building, the look of the building and the organization of the building. … Now we move into design development, where we work out the nuts and bolts.”

Gaining city approval and the necessary permits for the complex is expected to take between 12 to 18 months. With construction taking an additional 18 months, the La Jolla Music Society hopes to have The Conrad open sometime in 2018.

The Music Society has created a website for the project: theconrad.org