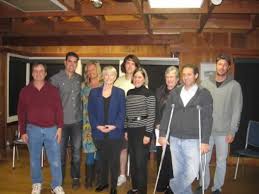 pril officers’ election with one candidate resigning and crying foul, claiming another board member actively lobbied against him.

Todd Lesser, a longtime LJSA board member on hiatus from the advisory group while chairing the La Jolla Traffic & Transportation Board, was unsuccessful in opposing Tim Lucas for the group chairmanship, losing to Lucas by a wide margin.

After the April 10 meeting of the advisory group, Lesser submitted his resignation. He chastised board member Janie Emerson, alleging she campaigned against his candidacy and for a candidate “slate.” Slates in advisory group elections are not allowed under City Council policy.

Emerson replied she only did what she was supposed to do as one of three nominating committee members. She characterized Lesser’s charges as a “misinterpretation,” noting the so-called slate was merely a list of recommended candidates. The chairmanship was the election’s only contested post.

Lesser said he was encouraged by others to run for LJSA president, adding, “If I had known Tim was interested in being chair, I wouldn’t even have run.”

Lesser said he was upset because “Janie was calling people and telling them if I was elected chair, that four people (board members) would resign.

“For her to do something like this purposely corrupts the democratic process,” he continued. “She blatantly violated our bylaws, Robert’s Rules of Order, and embarrassed LJSA and destroyed the board’s credibility. I’m going to ask for her to resign.”

Emerson said encouraging Lucas to run for president “was not my idea,” adding it was suggested by one of the two other nominating committee members.

Emerson said the nominating committee, whose meetings are not open to the public, felt Lucas was a viable candidate because of his long experience on the group and because “he came to almost every (group) meeting after he was termed off the board.”

Noting the officer election unfortunately turned “personal,” Lucas said, “There was some miscommunication,” adding “we’ll go over the bylaws again.”

“There’s a lot of things in the bylaws that need changing and improving,” he said. “I think there were some gray areas in the process.”

Though “frustrated” by the election controversy, Lucas said he hopes it won’t mar the important community service work of the group.

“Something we really want to focus on is building our membership and getting the community more involved with the group,” he said. “We are the recognized group for making recommendations for parks and beaches for La Jolla Shores. I’m really excited to run this committee. There are a lot of things we’ve been missing — land-use issues, bylaw changes — that we need to catch up on.”