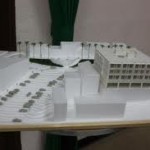 A model of the Belvedere Promenade project, which has been proposed for a stretch of Prospect Street, between Herschel and Girard avenues.

The revived Belvedere Promenade project would replace an existing one-way section of Prospect Street between Herschel and Girard avenues with a pedestrian promenade where people could gaze out over the ocean as they shopped, dined and socialized.

In addition, another one-way section of Prospect Street, just north of where Girard Avenue dips toward the ocean, would become two lanes. Parallel parking along the lower section of Girard would be converted to diagonal spaces to make up for the loss of parking on the promenade.

“This could provide that and should be promoted as such,” he said, adding that funds could be raised for the project through the sale of memorial bricks or tiles along the promenade or on a new retaining wall included in the plans.

Architect James Alcorn designed the plans more than two decades ago as a member of the Town Council. Alcorn and others envisioned it as an antidote to the chaotic mix of vehicle and pedestrian traffic at that intersection.

“It’s basically one of the only places in the commercial core of La Jolla where you can see the ocean without going into a restaurant,” Alcorn said.

In 2004, Alcorn’s vision became an official component of the updated La Jolla Community Plan, though the question of how to fund the project has kept it on the back burner.

The original estimate for the work was between $1 and $2 million, though the cost would likely surpass that today.

“We need to take the drawings further so we can get some good estimates,” Alcorn told trustees.
Alcorn said the project would be privately financed, with fund raising being a collaborative effort with the La Jolla Village Merchants Association and other groups.

“That would be our goal,” he said. “Raising the money to do it now is something I think people are positioned to do.”

Alcorn’s firm, Alcorn & Benton Architects, recently submitted the plans to the city’s transportation department for a preliminary review. They should receive a response within 30 days, outlining any required revisions, drawings, permitting fees or traffic mitigation plans.