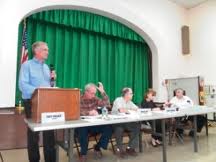 The former City of San Diego City architect, Michael Stepner ( author of the La Jolla Shores Precise Plan and the LJSPDO), explained in a letter why the FAR requirement was not incorporated as a tool to guide development in that neighborhood. “Because of the nature of that area, the San Diego City Council and the San Diego City’s Planning Department felt that more specific design guidelines were required to ensure ‘fit’ of new development in La Jolla Shores,” he wrote. “Setback and height requirements, coupled with the design guidelines, was a much better tool to ensure ‘unity and variety’ with new projects.”  But honor the San Diego Municipal Code