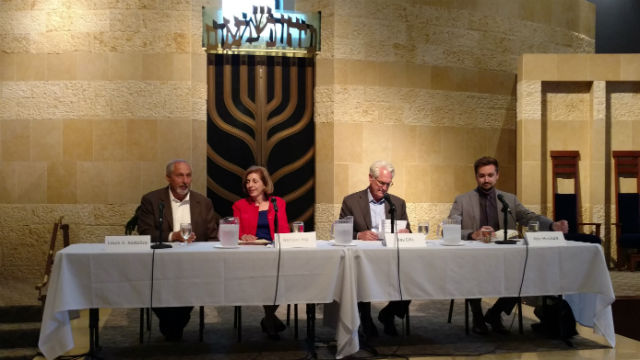 Four of the candidates for the District 1 City Council seat were in complete agreement Wednesday on one issue — no public money for a new football stadium.

“I do not support any public money going to a stadium,” said Ray Ellis, a small business owner and community volunteer.

Barbara Bry, a high tech entrepreneur and civic leader, said she was against not just public funding, but a downtown stadium. “I view that as land that can be used for expansion of our innovation economy.”

“I believe the NFL is wealthy enough to change their model and not rely on public funding,” said architect Louis Rodolico.

The four candidates answered questions at a community forum organized by Congregation Beth Israel, the oldest and largest synagogue in San Diego. One candidate, Lightner’s husband Bruce D. Lightner, did not attend.

The race is non-partisan, but the candidates answered a question about their party affiliation. Bry and Rodolico said they are Democrats, Heiskala said he is an independent, and Ellis described himself as a centrist Republican. “I am the most centrist candidate on this stage,” he said.

Rodolico has focused his campaign on completing the Regents Road bridge, arguing that this will reduce auto emissions without harming Rose Canyon. “Ever year the bridge isn’t built we have 15 major accidents,” he said.

Ellis, Heiskala and Bry all said they are against it.

All of the candidates acknowledged the challenge of affordable housing. Ellis and Bry, who are considered the leading contenders for the seat, both noted that they have released detailed plans for affordable housing on their websites.

Ellis said he would bring a team-oriented, problem-solving style that worked for his business and community projects to City Hall.

“I’m going to take that collaborative style to City Hall,” said Ellis. “I want to make sure that we have a good economic environment, that we’re creating good quality jobs.”

Bry said she never expected to run for local government but was convinced by her family to make the effort.

“I’m running because I really love San Diego,” said Bry. “I want to make sure we keep it safe, clean and prosperous.”