Although not part of the La Jolla Village Merchant’s Association (LJVMA) agenda for its Aug. 12 meeting at the Cuvier Club, association president Claude-Anthony Marengo once again brought up his proposal to have the 31-year-old La Jolla Planned District Ordinance (PDO) updated. During his president’s report, Marengo said he’d like to gather feedback on how and to what extent La Jolla’s blueprint for design could be reviewed or revised.

At the July 2 La Jolla Community Planning Association meeting and July 9 La Jolla Town Council meeting, Marengo said his intent was to have the PDO, written in 1984, eliminated completely. “I 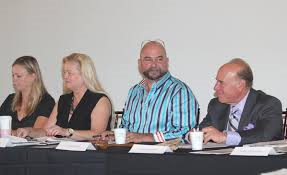 was going for shock value … to encourage the city to act upon fixing the PDO as soon as possible,” he said. “The city is reactionary, if they get in trouble, they react and they meet and that is their focus until it’s done. That’s what I was trying to push.” Now hoping to have the document reviewed and “shake things up,” Marengo said he would like outdated information struck from the 80-pages-plus document to reflect the changing needs of the commercial area of the Village. “Deviations (from the PDO) are becoming more common than not,” he said. “The PDO in La Jolla is not something that can be relied upon and needs to be looked at. The city and other authorities need to put a budget in place to review and revise the PDO.”

Agreeing that “there should be some updates,” Joe La Cava, the city’s Community Planners Committee chair and La Jolla Community Planning Association second vice-president, said he did not think the PDO should be done away with completely.

“We seem to be stuck in this malaise saying either we hate what’s going on, but we’re afraid to change it — or it’s not working, so let us throw it out and start over. We have to figure out how to work together to make these effective changes,” he said. “Clearly, it’s a very old document, but I’ve always been against people that say I don’t want change because once we open the door, we are going to lose control. La Jolla is pretty sophisticated and we can make those smaller fixes. I don’t disagree that there should be some updates, whether it’s a 10 percent (adjustment) or 100 percent or somewhere in the middle.”

The PDO committee granted the first two requested deviations from the PDO requirement that projects be mixed-use, with a ground-floor retail or commercial component. However, owners of the 1111 Prospect St. property (which has been vacant for two years) have had difficulty renting the property reportedly due to the PDO retail requirement. Their recent request for a deviation from the PDO to allow for more office space was rejected. The PDO states buildings must have at least 50 percent of retail frontage and no more than 25 percent for office. The Prospect Street property owners sought 50 percent retail and 50 percent office space. “My (intention) is to bring awareness that

the PDO is antiquated. These deviations are not unique issues and they are going to be more common,” Marengo said. “The code does not work and people are going to find more deviations that do work for them. That’s not good code.”

Although the board discussed the issue for about 45 minutes, it declined to take any further action.