The solution is obvious to the community! 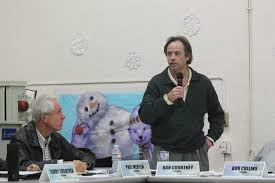 The La Jolla Community Planning Association (LJCPA) is recognized by the City as the “official voice of our community”. To maintain this distinction the LJCPA must adhere to their City-approved bylaws and City Council Policy 600-24 (600-24).

Article VII of 600-24 requires the LJCPA to elect a Chairperson, Vice Chairperson and Secretary. The Chairperson is to be the principal officer and preside over the LJCPA’s meetings. In the Chairs absence, the Vice Chairperson is to perform all the duties and responsibilities. The Secretary is responsible for the community planning group’s correspondence, attendance records, minutes, recording all actions taken at their meetings and to assure that members of the public have access to this information.

Currently the “official voice of our community” doesn’t have a Chairperson, a Vice Chairperson willing to perform all the responsibilities in the Chairs absence, or a Secretary willing to perform all the duties and responsibilities. Instead, since no Trustee is willing to be the group’s Secretary, a “figurehead” Secretary has been elected and the recording of the groups minutes is assigned to a different Trustee each month. The lack of a perpetual Secretary adds confusion to the preparation of the monthly agenda, the quality of the meeting minutes and the applicants review process. For example, it took more than 45 minutes for the LJCPA to approve the draft minutes at their May meeting and in June they postponed the approval of the draft minutes until July’s meeting.

The dysfunction of the LJCPA was accentuated at the June 5th meeting; “It’s a pretty obvious observation were having problems here, probably the most serious problems the LJCPA has in the past ten to fifteen years. I can’t think of any solutions. We have a lot of people (Trustees) who are dealing with family members with serious illness. We just seem to be shorthanded. I don’t know what the solution is, but there are obvious problems with this group. It is not fair to our community or applicants coming to present their projects to this group. For a few months now we have had items not getting on the agenda. We all know the reasons these things are happening. Nobody wants to do any of the grunt work, which is understandable. One way or the other we have to get it together, we have to fix these problems. Maybe people have to step-up and start taking on more responsibilities. Or maybe some folks need to resign to give us the opportunity to recruit new Trustees, who have the time to do the required duties. But one way or another we owe it to the community to get this ship back on course”.

The solution is obvious to our community. Our community wants the LJCPA Trustees to start abiding by the terms and conditions of 600-24 and the LJCPA’s City approved bylaws. You volunteered for this job, either step-up to the task for which you were elected, or step-down!