Will 2017 restore integrity, transparency and credibility to our community review process? 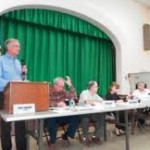 The La Jolla Community Planning Association (LJCPA) took a great step in 2016 toward improving the integrity, transparency and credibility of the La Jolla community review process. The long-term affiliation with local architect and Point Loma resident Tony Crisafi has ended. He recently resigned as the Chairman of the La Jolla Shores Permit Review Committee (LJSPRC). While serving as the LJCPA President or the LJSPRC Chairman he brokered his influence as either an applicant’s advocate or adversary. The following examples show how as a “community volunteer“ his actions were detrimental to our community review process. 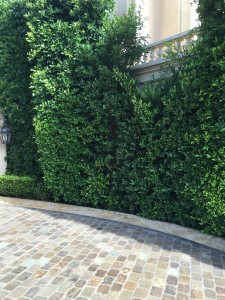 Behind this hedge was the location the single car garage and stacked car lift was to be installed.

Applicant’s advocate: Despite a 8-4 LJCPA vote to appeal a home he designed, which had no driveway, garage or off-street parking, he elected not to file the appeal as the LJCPA President. When confronted by former Trustee Joe LaCava and others, he announced a “compromise agreement” had been reached to resolve the issues. The agreement was reached at Crisafi’s office, not at a public meeting as required by the LJCPA bylaws, between he and his mentor Trustee Phil Mertin. He declared, “We found a way to attach a single car garage to the home with a stacking car lift system to satisfy the parking requirement”. The picture to the right shows their “compromise agreement” was a scam to avoid compliance with the San Diego Municipal Code, the La Jolla Shores PDO (LJSPDO), and a lengthy and expensive review process.

Applicant’s adversary:  Again as President of the LJCPA, Crisafi was employed to oppose the Encore Trust residence in La Jolla Farms. As a project adversary he chose to file numerous appeals adding time and expense to the project throughout the City approval process. As his cohort Merten is known to do, Crisafi created false and misleading images to influence the Planning Commission’s vote against the project. When he appealed the project to the City Council, Crisafi’s adversarial intentions were exposed and once again his creditability was in question. What did he do? He requested LJCPA’s covert attorney to be present and defend his creditability in front of the San Diego City Council! 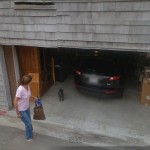 Click here to see Naegle’s 4 parking space carport has been converted to a illegal one car garage, with no ADA required parking.

Our community recommends the following three additional steps be taken in 2017 to further restore integrity, transparency and credibility to our community review process; (i) Hold Trustees accountable for their unethical actions, therefore mandate Trustee Phil Merten also resign. (ii) The LJCPA Trustees should stop using attorney Julie Hamilton to form their clandestine community groups. Our community recognizes the deceitful intent of these infamous groups (La Jolla Shores Tomorrow, Save La Jolla, Tax Payers for Responsible Land Use, La Jollans for Neighborhood Preservation etc.) is to delay and add cost to applicants project. (iii) Stop allowing Trustees and/or committee members who are known code violators to take part in the review process. In December the LJCPA Trustees appointed Ms. Myrna Naegel to the LJSPRC, while knowing her building is in violation of the San Diego Municipal Code and the LJSPDO. The below City letters confirm her garage is illegal. She was instructed not to enclose the carport and maintain four parking spaces as required by the LSPDO. It is an insult to our community review process for her to judge an applicant’s proposed project for compliance with the LJSPDO while she violates the LJSPDO. 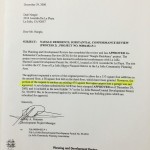